Beer-can chicken is one of our go-to summertime staples. Even though it takes a good chunk of time to prep and cook, it’s a relatively easy meal that pleases almost everyone.

Last week I decided to punch up my normal recipe, so I started by brining the chicken for 24 hours in the following:
-2 12 oz. homebrew beers
-1 liter of water
-2/3 cup salt
-2/3 cup brown sugar
-1 tablespoon dried rosemary
-8 bay leaves

I whisked the brine in an pitcher, cleaned the chicken, put the bird in a gallon freezer bag and topped it off with the brining solution. Just go ensure that I didn’t get salty chicken water all over the fridge, I double-bagged it, and put it upright in a large Tupperware. 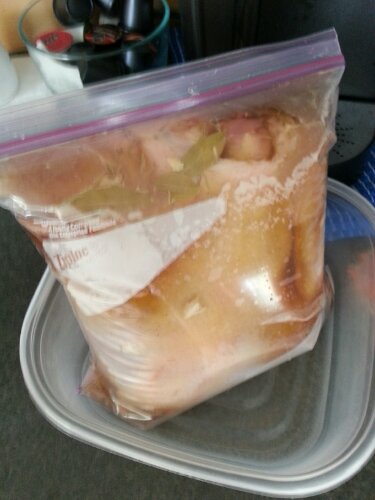 I could barely wait to start making dinner the following day.
One of awesome things about this dish is that it’s difficult to overcook it: the beer keeps it nice and moist, and the use of indirect heat allows for a measured slow-cook.

I prepped the grill by turning the front burner all the way up, and leaving the rear burner on low, which is as close as I can get to indirect heat on a two-burner gas grill. I pushed the tray all the way to the back of the grill (so it rests over the burner that’s set to low) and filled the reservoir with part of a beer (an Irish red ale homebrew), a tablespoon of dried oregano, and three cloves of crushed garlic.

After draining the brine, I set the chicken upright on the tray, and coated it with a liberal sprinkling of Weber’s beer can chicken seasoning.

Note: I have made my own dry rub in the past, but when I don’t feel like it, I default to Weber’s… it’s tasty and consistent.

Once the bird is on, I close the lid and make sure not to open it for 30 minutes, which gives me a good amount of time to prepare the glaze and the veggies.

Since I have a pan conveniently designed for grilling chicken and vegetables simultaneously, I chop, oil and season some veg to go with the bird. This time I used zucchini, bell pepper and sliced mushrooms, and spread them around the pan when I first check the chicken (after 30 minutes of cooking). 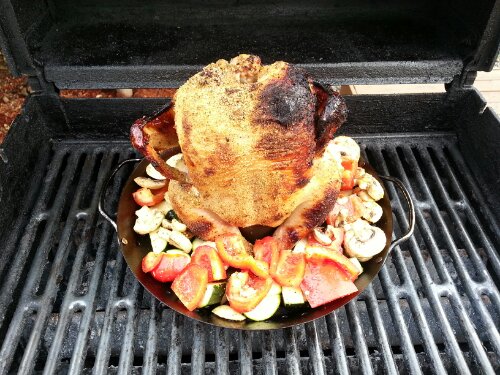 Finally, I made a simple glaze, which I spread onto the skin about every 15 minutes. The glaze is made of the following:
-1 cup brown sugar
-1/3 cup ketchup
-1/4 cup vinegar
-salt and pepper
-1 tbsp Weber’s seasoning

The total cook time for a five pound chicken was about 1 hour and 45 minutes, and after I took it off the heat I let it rest for about 15 minutes. The result was a delectably juicy bird with crispy skin and a great balance of salt and sweet. 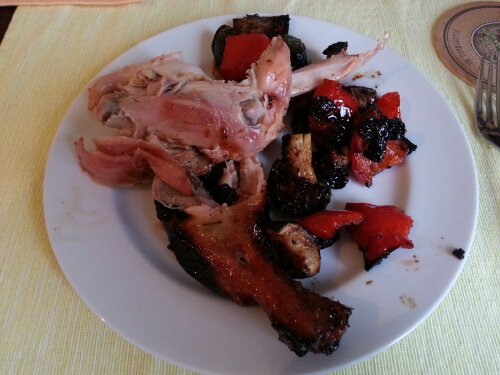