After whipping up two perfect roast chickens  for our New Year’s Eve party, and thoroughly enjoying the resulting feast, I carefully stowed the picked-over carcasses and leftover vegetables for a few days. I was waiting for a free afternoon, when I could take my time to boil down the leftovers into a rich stock, and then subsequently transform that into one of my all-time favorite meals; chicken noodle soup.

Making the stock is simple. I piled all of the leftover chicken remains and all of the leftover vegetables (minus the potatoes) from the previous meal into a stock pot, added two rough-chopped carrots, half a rough-chopped onion, two chopped stalks of celery, a bay leaf, a dusting of salt and pepper, about half a cup of sliced shallots (left over from a dish I had prepped but not had time to make), and then filled the pot to the brim with water. I let that whole mixture simmer for about four hours, during which time I would stir it periodically, sample the broth and season it to taste. I also ended up adding four more chicken breasts about two hours into the boil, as the white meat had all been eaten on NYE.

The only part of making soup that I tend to dislike is what follows after the stock has boiled down, and the meat is fall-apart tender, and that is the scalding and messy process of picking the meat out of the broth, and straining the solids from the liquid. This can be a long, laborious and sloppy process, especially given my tendency to allow the stock to boil down to the point that the carcasses have completely fallen apart, and fishing the bones from the liquid includes picking individual vertebra from the pot. Ultimately, considering the tenderness of the resulting meat, this process is worth it, and it’s probably my fault for forgoing the tongs in favor of my fingers while digging for the tasty bits in the too-hot-to-touch crock-pot. Of course, once the liquid is strained out, and the meat is separated, the process of creation can begin.

Note, you can forgo this entire process, and just use canned chicken stock, but doesn’t that sound like such a dirty word  – “canned” – at this point?

Ingredients you will need for the soup:

The rest of this process is pretty simple.

After wiping the crock pot down (I always make a little bit of a mess while straining the liquid), simply return the liquid to the vessel, and stir in the carrots, celery, leeks, and chicken. Allow the mixture to simmer for at least 20 minutes (or longer if you wish), which is enough time to allow the vegetables to soften up, but still have a nice toothy mouthfeel. Taste the broth as you go, and add salt and pepper if needed.

As the soup simmers, use the time to make the egg noodles (following the directions on the package), or use homemade pasta cut into smaller segments… which I can do, because that’s how I roll now.

I choose not to combine the soup and pasta until I serve it, simply because I always make too much, and end up storing the remainder in the fridge or the freezer.

Stir in the parsley about five minutes before serving, which imparts a wonderful fresh flavor into the dish just before it hits your spoon.

Serve over pasta, and enjoy! 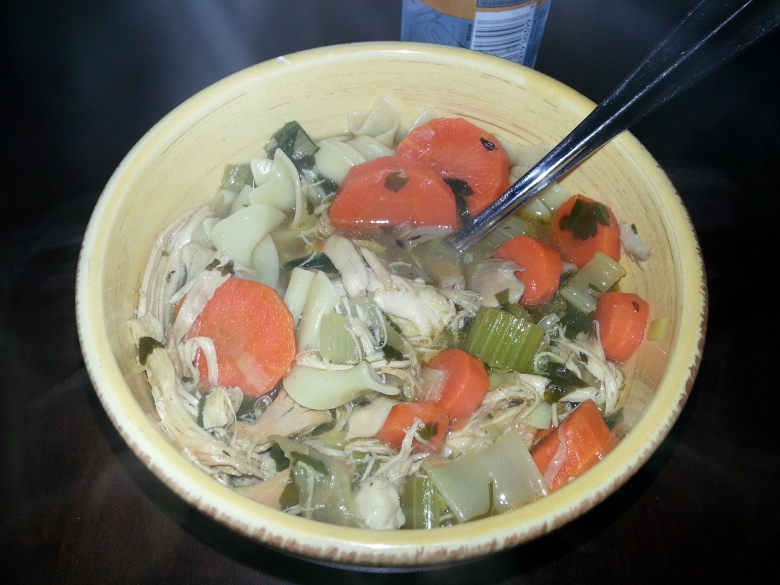