That’s all she said. “You should go for a run.”

It was part way through my first year of teaching high school Language Arts. It was early in my career, meaning I was still planning lessons for 4-5 hours at a stretch, and writing and re-writing them until the minute before class started. In fact, for the first few years of full-time teaching, I was burning 2-3 hours of planning time for each hour spent in the classroom. As you can imagine, I didn’t have a lot of time for other things, in reality, I was thinly-spread, overtaxed and under-rested, and relied relatively heavy on black coffee and junk food to keep me going.

At the moment there words were uttered, I was backing up the copier line, running last-minute stacks of some worksheet or other while slurping down my third or fourth tumbler of sludge. I’m sure I looked as terrible as I remember feeling: groggy and sluggish, and stuffed into whatever shirt I had plucked from my closet that morning that generally felt like it fit.

And then I heard those six jarring words. I turned to see that one of my veteran colleagues had sidled up behind me from her place in the copier line, and ever-so-gently offered what she undoubtedly saw as gracious, caring and wholly-necessary advice.

I don’t remember what my response was, although given my general mental state at the time I’m sure it was less than profound. That moment she posed her suggestion, though, has rattled around in my brain for years; one of those vivid memories of seemingly little consequence that you just can’t seem to shake off.

I know why I can’t shake it off. It’s really quite simple.

I’m uncomfortable with my body. I have been for a long time.

I think it really began in fifth or sixth grade. I was on a walk with my family, and my little sister asked me why my butt stuck out so much.

I’d never really thought about it.

I remember trying to turn around to personally witness my protruding backside in what must have been – to the rest of my family – a moment of comic gracelessness. I was unsuccessful in my endeavor, and thus, was forced to imagine the great lengths to which my butt stuck out.

This semi-consciousness of my body grew, as it does for all adolescents, and by high school my general awareness of the presence of members of opposite gender had pushed it to new heights.

By seventh grade I had quit soccer and joined Boy Scouts, and while both of these moves were immeasurably suited to my personality, in my mind, they had very measurable physical effects.

Thankfully, as I lumbered into junior high, so too did two physically-forgiving though ultimately forgettable fashion trends: baggy jeans and flannel shirts. As such, I spent the better part of my high school career draped in saggy shocks of denim and plaid.

I lived in two worlds.

In one, I survived my days in school by attempting to hide my perceived issue in less than subtle ways, such as running in gym class while holding the bottom of my shirt out in front of me with one hand, a move which only drew ridicule and derision from my peers. Offhand comments by friends (“You can date her, she’s your size”), my teachers (“You’ve always been kind of a slug”), and my basketball coach (“Man, we have to get you and Toby to drop a few before we can hope to win”, only made it worse.

In the other, I spent my weekends comfortably with like-minded friends, watching movies, playing video games, and scarfing down whole pizzas and cases of Mountain Dew.

To their credit, my parents tried hard to get me to lose weight. Knowing my disdain for team sports, they encouraged me to try alternatives and gave me incentives to exercise on a regular basis, until, finally, mountain biking took hold.

I spent my senior year biking – and infrequently going to the gym – in the afternoons and on the weekends, and though pictures show that I dropped some weight by the time I left for college, I never felt like I had. In fact, I felt the same sort of biting self-consciousness that I had when my attention was drawn to my protruding rear-end.

I honestly don’t know if I gained the freshman fifteen when I started college, but I can remember feeling like I had. In retrospect, there’s no way that I hadn’t blown up like a balloon considering the inconceivable quantities of of Burger King, Dominoes, and Wal-Mart popcorn chicken that I shoveled down my gullet that year.

By the end of my senior year incessant workouts in the campus gym had caused yet another fluctuation in my body-type, and though I never FELT in-shape, pictures from that short span prove that I’d done a decent job.

Consider this picture of my (future) wife and I from 2004. 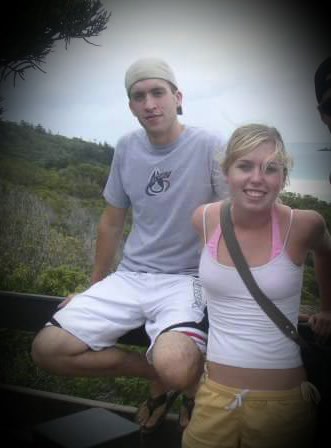 Yup. During my entire time studying abroad in Australia, which is where that beautiful memory was captured, I weighed somewhere around 180 lbs, and I was so deeply self-conscious that I was uncomfortable with the thought of taking my shirt off to go swimming.

So a few years later, when a well-meaning colleague advised me to get more exercise, there was no way that I wouldn’t take her kind advice as a slight to my figure. I mumbled and moved on.

Later that year, I received an equally memorable piece of advice from a different teacher. I had noticed that he wore shorts on a regular basis, which was in sharp contrast to the slacks, button-up and occasional tie that I struggled into each morning. I finally got up the guts to ask him why he wore shorts. His response was simple, but eye-opening: “You can’t do this fucking job if you’re not comfortable with yourself.”

I nearly immediately switched to wearing jeans, polo shirts and – yes – even plaid, though this time around I opted for the kind that actually fit me. With the prodding of my wife I once again began working out, and started making a conscious effort to eat food less likely to kill me.

Of course, she didn’t realize that her simple prodding to cook healthier foods would open the Pandora’s box of home-cook-style culinary exploration that has become Love, Food & Beer.

Let me give you an example. This is what I made myself for dinner last night:

I call it the Koreuben. It’s a Reuben laced with Korean flavors. More specifically, I combined the sauerkraut with an equal portion of chopped spicy kimchi, and slathered the bread with a generous portion of thousand island dressing mixed with a heaping spoonful of gochujang.

It was salty, meaty, cheesy, spicy and absolutely delicious, and I washed it down with an equally delicious Hopsmack IPA from Cascade Lakes Brewing Co.

I finalized my plans for this monstrous sandwich while pounding out my third mile on the treadmill at Planet Fitness, roughly an hour before I started layering Swiss cheese and Boar’s Head corned beef on thick slices of seedless rye.

See, for the past year or so I’ve been going to the gym, to lift weights and run, fairly regularly. During the school year I wrench myself out of bed around 5:30 to get a workout in before the first-period bell, and I have to admit that I like the way it makes me feel. I enjoy feeling that I’ve accomplished something for the day; that I’ve sweat out the stress. I like feeling like I’ve made progress, especially now that I feel like I’m more conscious of it what goes into it, and what I get out of it.

It’s like the Koreuben. I put a lot of thought into creating it. I know that the ingredients I selected are both delicious on their own, and perfectly complimentary to each other. I know that mixing equal portions of sauerkraut and kimchi will both enhance the acidic flavor while dulling the fermented bite, and that a heaping scoop of gochujang in a 1/4 cup of dressing will make for a spicy kick without overwhelming that ubiquitous thousand-island tang.

I also know that my creation is decidedly unhealthy, and that I TRULY don’t want to know how many calories I ingested when I scarfed it down.

Likewise with the IPA.

What I do know is that they’re both delicious and  – like working out – they’re things I enjoy; things that make me happy.

So now, when I look in the mirror, and see that the exercise seems to be making a noticeable impact (at least, in my mind), it’s also hard to ignore the persistent inner-tube floating about my midsection. While – in the past – I certainly would have let this disparaging sight cripple my already negative sense of self, I presently take solace in the fact that it’s where I keep my IPA and Koreubens. In other words: I certainly know what goes into it, and I have definitely grown more aware of what I get out of it all.

Unfortunately, I still don’t know if my butt sticks out that much… but if it does, I know why.

PS: Tomorrow, I’ll tell you how to make a Koreuben.

Head over to the blog (#linkinbio) to check out my recipe for grilled chili lime salmon. I posted it this morning, but it's never too late to post you in the right direction. Try it out and let me know how it goes!
Made these delicious clams yesterday with bacon, corn, leek, and white wine broth, and fried bread.
I recently cooked some of the fish that I caught!
Leftover steak?
We had a fun day fishing down in Wesport this weekend! We got our limits on salmon and rockfish, so I've got about 6 lbs of Coho and 7.5 lbs of rockfish destined for the grill, freezer, etc. 🐟 🍻
Happy Thursday!
Pizza tip: Add arugula for the last few minutes of the cook time. It adds a delicious peppery herbaceous flavor, and you can pretend it makes it healthy!
Sometimes it just needs to be taco night. 🌮
Checked out the Dru Bru tap house for the first time this afternoon. They had some tasty beers on tap, a food truck serving up yummy grub, and a pretty sweet beer garden area. One of those tasty brews was this: a Mango Pale Ale called 'Angel Dust' that was crisp, refreshing, and just the right amount of fruity... and if it looks weird, it's because there's glitter in it.
Loading Comments...