I’ll be honest. I stole the basic idea for this recipe from my friend Andrea. Her and Jonny rolled into our weekend at The Cabin with some delicious pork tacos, and all the appropriate fixin’s, including a container of grilled corn tossed with green onions.

Granted the pork was hands-down delicious, but the corn set it off in all the right ways. The kernels were charred and crunchy, and added that sweet little somethin’ that the tacos were looking for.

So I appropriated the basic concept.

The following is a – perhaps unnecessarily – more complicated version of corn salsa. Just remember, if all else fails, or this seems too complicated, just toss some corn with green onions and call it a day. 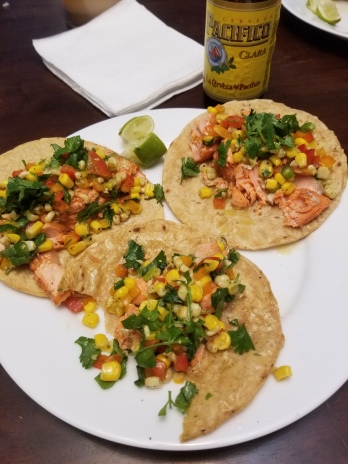 PS – To be honest again, I thought FTW meant “F*** the World”, until Andrea commented “corn salsa ftw” on my Instagram post. At that point I was able to use context to discern that it actually means “for the win”.

Begin by grilling the corn. Yes,  you could just use a can of corn if you want, but grilling the ears provides that wonderful charred flavor, and gives you that warm feeling from standing next to your grill… because grills are warm. BONUS – you’re grilling, so it’s appropriate to drink a beer (if you’re of age to do so).

To grill the corn, shuck the ears, and drizzle them lightly with olive oil, and give them a dusting of salt and pepper. Place them on the grill over medium-high heat, and monitor them closely. You’ll need to turn each cob at least two or three times to get an even char.

I would recommend turning (or at least checking) the corn every 3-4 minutes, for a total of about 12 minutes of grilling time. When the kernels are cooked to your liking, pull the ears off the grill, and let them cool for a few minutes, to make them easier to handle.

If you’re comfortable turning your back, you can take care of the rest of the prep as the corn grills.

Add the diced peppers and onions to a large bowl.

At this point you have two choices; you can (A) toss in the lime juice, olive oil, and cilantro as-is, which will be delicious, or (B) blend together the lime juice, oil and cilantro (and a dash of salt and pepper) into a simple dressing. I originally made this choice so I could use the dressing to cook some salmon as well, but it turned out to be a delicious addition to the corn mixture.

To cut the kernels off the cob, hold the stem, and stand the cob on end on a cutting board. Using a kitchen knife, start at the top, and cut along the cob using a downwards slicing motion. The kernels should slice off nicely, and the cob itself is so dense that you should not be able to cut too deep. Rotate and repeat.

When you’re finished, scoop the corn into the bowl with the other ingredients, toss it all together, and serve it up!

I used this versatile recipe in a number of different ways over the past few weeks, including as a topping for tacos, baked into nachos, grilled into quesadillas, and straight up with salsa!