I’ll be completely forthcoming on this one – not to suggest that I’m NOT usually forthcoming… nevermind – but this recipe was a random find from http://www.foodandwine.com. In fact, I had been trying to think of recipes to make for a superbowl party – GO SEAHAWKS! – when I saw this recipe pop up in my facebook newsfeed. It was enticing: the picture looked delicious, I like Andrew Zimmern (if only in that I like seeing him scarf down things that would never pass my lips), and I had never tried making one-pot wings before. I was already planning on making a batch of baked All-American wings (I’ll post the recipe later), so this new find was right down the same alley, and seemed like it might be a crowd-pleaser. What follows is the slightly modified recipe as found on foodandwine.com.

In a large nonstick frying pan, cook the chicken wings over moderate heat, turning once, until golden, about 10 mintues fro a single batch. Add the ginger, chiles, star anise and cinnamon and cook over moderately low heat, stirring, until fragrant, about 1 minute.

Add the soy sauce, sake, oyster sauce, mirin, sugar and 1/3 cup of water and bring to a simmer over moderate heat. 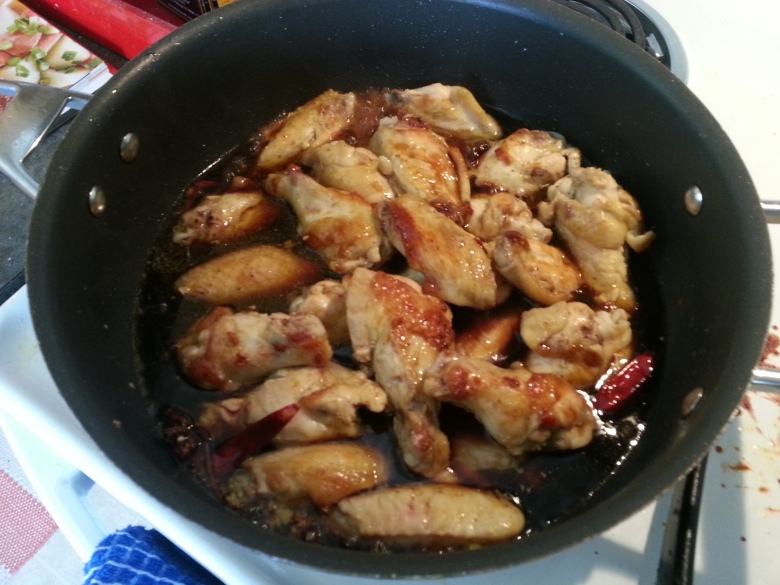 Cover and simmer for 10 minutes. Uncover and cook over moderately high heat, stirring occasionally, until the wings are cooked through and the sauce has reduced to a thick glaze, about 8 minutes.

Discard the chiles, star anise and cinnamon. Transfer the chicken wings to a platter, scatter the scallions on top and serve with lime wedges.

I would highly recommend this recipe. The wings were tender and flavorful, and the sauce was sticky, sweet and just a little spicy. The dish had a rich and beautiful depth of flavor that the onion and lime garnish served only to enhance.

The only drawback was that the Mirin, which is a sugary rice-wine (like sake) condiment used mostly in Japanese cuisine, was a little hard to find.

Father's day breakfast: coffee in new mugs that the girls made for me, and a donut mountain.
This looks like it would register on the ugly delicious board. Smoked beer-can chicken. Sausages. Grilled potatoes. Brussels sprouts. A can of Ollie.
I don't know how patriotic it is but the grumpy old gargoyle has brought forth a pretty tasty brew this time around. Enjoy by 7.04.21 is brewed with tangerine and pineapple, Which would normally give me paws as pineapple beers are usually just too sweet for my taste. In this case the pineapple is super subtle, and the tangerine lends a nice simple citrus taste to the hoppy goodness. Seems like this beers saving grace is it's overall strength, which is frankly difficult to ignore at 9% abv, with palpable malt and hops to match.
I did an experiment to see if tacos are better with the meat or the slaw on top. It's interesting, in that it turns out it's exactly the same. Either way, tacos are delicious. In this case it was thin sliced sirloin from Butcher Box and a Southwest slaw mix from Trader Joe's.
Nick Offerman, Lagavulin and Guinness are pretty great, but my wife is the best ❤
Finally sent out for a sample pack from @bonescoffeecompany - which means now I have a decision to make.
This is easily one of my favorite seasoning blends at @traderjoes
Finally got to try hot chicken! This stuff is delicious! 🔥🐔 Between that and my Golden Road Hazy, it was a pretty tasty evening. 🍻
On today's episode of "Can Brian Grill That?" I put some tater tots on my Weber and see what happens.