When the lovely human beings over at Food Should Taste Good reached out to provide me with some tasty goodies (in return for a few recipes and beer pairings), they asked my preference. Having little experience with their products, I requested a “dealer’s choice”, and the resulting shipment included four different types of their chips, including two bags of their the sweet-potato tortilla chips. Considering my enthusiasm to produce a recipe and beer paring for Cinco de Mayo, those two bags fell to the bottom of the box as I tore through the Jalapeno, Guacamole and Blue Corn varieties. I produced a grilled pineapple and jicama salsa to go with the guacamole-flavored chips, and paired it with a Pacifico; a sweet, spicy and fun combination to compliment the holiday.

A week or so later, I rediscovered the bags of Sweet Potato chips, which had made their way to the back of the cupboard. I ripped into one, and immediately regretted dismissing them in favor of the other bags. I munching, and the temporary lament of my forgetfulness was soon washed away by a flood of recipe ideas, and potential beer pairings.

I quickly realized that the sweet potato chips were great on their own: they’re crunchy, just the right amount of salty, and have a distinct hit of that yummy sweet-potato flavor that walks the line between sweet and savory. It was clear that they could be used to scoop salsa or guac – much like any other boring ol’ chip – but the front of the bag claim that “they’re crackers too!” is what drew my attention. All Food Should Taste Good tortilla chips have the same statement on the front for the bag, but with these, I knew I wanted to use them as such.

I ran through my short list of cracker-borne foods, and hit the jackpot with smoked salmon.  Considering my first impression of the sweet potato chips was a distinct combination of sweet and salty, it stood to reason that a similarly complex food would pair perfectly. To kick up the complexity, and add complimentary flavors, I modified a favorite salmon dip recipe to delicious effect.

The basic recipe is a combination of smoked salmon, cream cheese and chives, to which I added Greek yogurt, shallots, crispy pepper bacon, and a dash of spice. The result is a savory dip with hits of tart, spice, smoky and sweet.

I chose to pair it with a New Belgium Fat Tire, a distinctly malty amber ale. New Belgium’s flagship brew has been a staple of the craft beer scene since it’s introduction in the early 90’s. Fat tire has a mild hop character, and while it’s malt-forward and rich, it’s also smooth and drinkable, making it the perfect brew to savor or session, whatever the situation.

The following recipe was designed to be enjoyed with Food Should Taste Good Sweet Potato tortilla chips, and a cold New Belgium Fat Tire… though I supposed it would also be delicious with whatever else you have on hand! 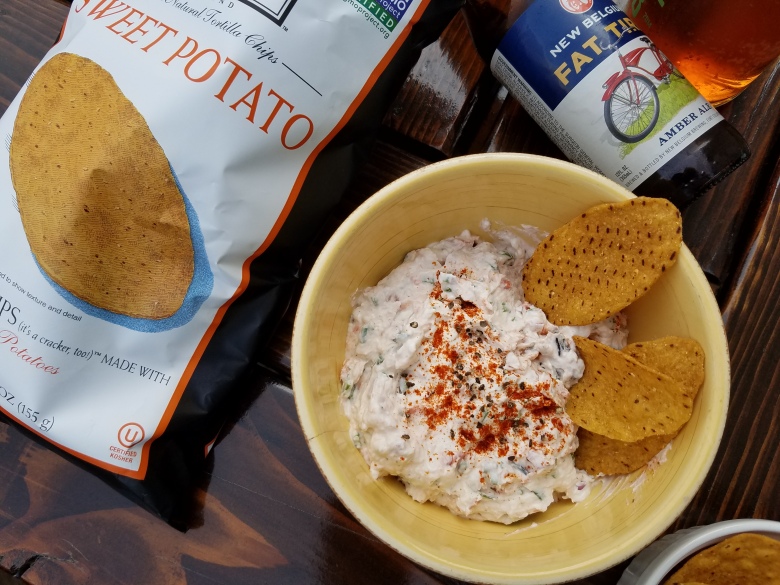 Peel the skin off the salmon, and flake the fillet it with a fork. You’ll want little pieces, so it’s easy to mix it into the other ingredients

Prepare the scallions and the shallots by dicing them. I like to leave the pieces just big enough to give each scoop a little texture – an added crunch – without giving it an overwhelming flavor: no one like a mouthful of raw onion.

Place the cream cheese and yogurt in a medium-sized bowl, and fold in the remaining ingredients. You’ll want to mix it gently, as the salmon will continue to break apart as you mix. If it’s too aggressive you’ll end up with salmon flavor, but no discernible pieces of fish.

Add salt and pepper, and chili powder to taste, and adjust according to your desire. This might depend on the type of fish that you use, and the way in which it was made. I often use a pre-seasoned smoked fillet, which have a good amount of salt, pepper and garlic already on the fish. The bacon also adds a good amount of sodium, so if you increase the amount  of bacon (an all too tempting reality) then you’ll probably want to cut back on the salt.

Serve it up with some Food Should Taste Good Sweet Potato chips, and a New Belgium Fat Tire amber ale.